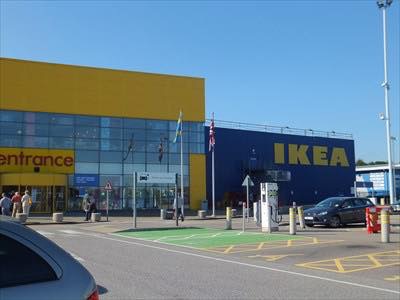 If you’re planning a family trip to IKEA, here’s my honest review of a very pleasant three hours (it might have been two weeks actually) that I spent there today.

First of all, we inadvertently took a wrong turning close to the entrance looking for a trolley and ended up at the checkouts, and in hindsight I should have taken this little divine hint from the gods of meatballs and MDF and just buggered off there and then. However, we headed back to the main lobby for a second go.

Round Two, and this was when we realised that nobody gets a trolley at the start. Apparently you are meant to wander around the showroom and make little notes of everything you want, and grabbing a trolley is only necessary after an hour of constantly bumping into yummy mummies who are fretting about whether or not they will be able to convince their friends that their furniture purchases have actually come from House of Fraser or John Lewis. I must have accidentally elbow-titted ten of them – it’s a wonder that one of their roidboy, perma-tanned ‘city traduh’ husbands didn’t knock me out.

I had to laugh at someone talking about the ‘uniqueness’ of the Kallax unit. Yes, you can make a real statement about your home design individuality with a storage solution that is in literally every house, everywhere. Some of the drawers work out more than the frame as well, but the holes are Amazon box-sized if you want to save a few quid and have genuinely given up.

At one point, I started to crawl into one of the kid-sized tee-pees to rock back and forth while soothing myself to ABBA Gold on Spotify, but apparently it was already lunchtime.

10.45 in the pissing morning is not ‘lunchtime,’ but my four-year-old and two-year-old had other ideas because they had been up since 5.30am in a frenzy about the fact that we promised them a trip to this smorgasbord of flatpack cockwomblery. For some reason, telling my kids that they are going to IKEA is like telling a dog that he is getting a second wanger.

I was expecting a restaurant, mainly because of the whacking great sign saying ‘restaurant,’ but instead we spent the best part of half an hour queueing and shuffling at a snail’s pace past something that resembled a cross between your senior school canteen, a Toby Carvery and last week’s episode of The Walking Dead. Every time a few pieces of Daim Cake arrived in the cabinet, people were pouncing on them like walkers who have just sensed some poor sod who isn’t brown bread yet.

Here’s a tip. Politely decline the little Swedish flags that they put in the meatballs, otherwise your little ones will engage in a miniature jousting contest with chunks of lingonberry jam and what some people may call ‘gravy’ flying all over the place.

After carbing-up like Sir Mo Farah getting ready for a 10k, it’s time to hit the warehouse. The theory is that you follow the product codes, grab all the different pieces of your chosen furniture, pay up, and then bugger off before the whole experience develops into something that you will be describing to a therapist in 30 years’ time.

However, the reality is that you are only one wrong turn away from picking up a desk unit with an oak frame and white vinyl drawers. For some reason that is best known to the Swedes, it makes perfect sense to scatter the components of your chosen piece of furniture over a wide area. It’s actually very clever, because you are forced to walk past even more displays with exactly the same stuff as upstairs that you thought was ‘tat’ which is now suddenly far more attractive because it’s on a raised platform.

By this stage, I was ready to be Simon And His Technicolor Corner Desk Unit but my wife convinced me to go back and get the right parts, and after rearranging the trolley five times I was still left with an unstable battering ram with wonky wheels. Just getting the thing to move in a straight line would have been a mission for Eddie Hall, and so I constantly weaved from one side to the other like something off Ski Sunday.

The self-service checkouts are great unless you have forgotten to line up all of your product barcodes, and in my case I ended up treating everyone else to an interpretative dance act as the handheld scanner cable was woefully short.

To cap it all off, we finally escaped from the place and the kids reminded me that I had promised them one of those stupid bloody puppets each if they didn’t kill each other. I didn’t remember saying anything of the sort, but it may have been during my tee-pee meltdown and so I duly obliged.