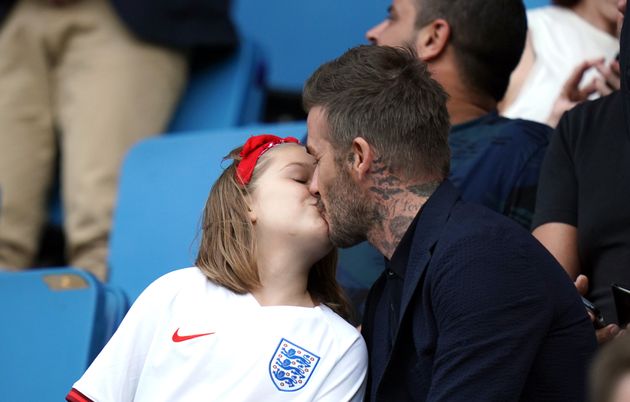 So David Beckham has been in the news again because he was seen kissing his daughter Harper ON THE LIPS during the England Vs Norway Women’s World Cup quarter-final on Thursday.

Just like the last time this made headlines, the usual morons have come crawling out of the woodwork, calling him everything from ‘weird’ to ‘disgusting’ because so many people seem to think that there is something sexual about kissing your offspring in this way.

Here’s the thing. It’s only weird if you use tongues and play some soft jazz in the background, or perhaps Je t’aime moi non plus by Serge Gainsbourg.

Anything less than that and it’s simply parental affection, and I think it is setting a great example. After all, too many kids these days seem to be getting theirs second-hand via selfies with bunny ears.

Too many keyboard warriors seem to think that everything is out and out meganoncery these days. Maybe Chris Morris had a point after ‘that’ episode of Brass Eye.

I have three darlings myself, and I wouldn’t think twice about kissing either my daughter or two sons on the lips – imagine if Dave would have been spotted giving Brooklyn, Romeo or Cruz a loving peck.

Bloody hell they would have a field day.

Excuse the tache – this was taken last Movember. I’m surprised that she didn’t have a sneezing fit afterwards or something.

Where will this all end? First the kissing, and then people will try and ban hand-holding. It doesn’t matter if your kids run head-first into oncoming traffic because you’re not pushing unwanted sexuality onto them.