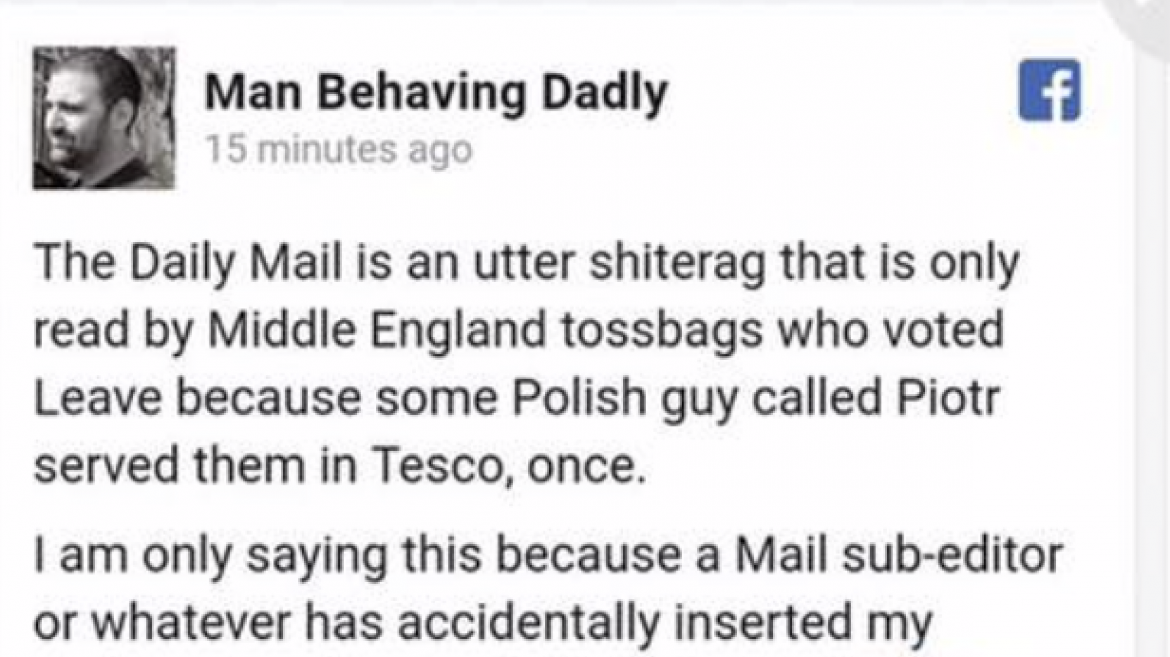 On 2nd July 2019, for approximately one hour (and one glorious hour), I managed to ‘hack’ the Daily Mail website to display a message declaring that the newspaper was a ‘shiterag’, before continuing to say some very naughty things about the people who read this fine publication.

Although I say ‘hack,’ some poor unsuspecting sub-editor somewhere actually left a virtual gate wide-open for me to go marching in to create mischief.

You may have noticed a while ago that the hilarious parent blogger Whinge Whinge Whine (AKA Frances Taylor) went viral after buying a ‘Party Time’ banner from B&M Bargains and finding that there had been a cock-up in the factory – she had been left with ‘Pimty Tare’ – a phrase that has now entered Facebook folklore.

The post itself reached more than half a million people, and so it was only a matter of time before the mainstream media picked it up and repackaged the content as ‘news.’

However, someone who I assume must have been a sub-editor at The Mail made a teeny, tiny, itty, bitty error with the coding behind the article. Instead of inserting a link to Fran’s Facebook page, for reasons best known to them they picked up on a related post that I had made about an online store called The Paper Concept who had decided to manufacture their own ‘Pimty Tare’ banners as a bit of a giggle.

But, instead of referring to this specific post, they just embedded my entire Facebook page into the Article – a fatal flaw. This meant that whatever was at the top of my Facebook page would automatically get ‘scraped’ and displayed right on the Daily Mail website for the whole world to see.

Being the mischievous fellow that I am, and with Fran’s permission (mainly because she was f*cking raging by this point), I seized the opportunity and posted the following:

Sorry I couldn’t come up with anything a bit more eloquent, but I had to act fast. Sure enough, and for a whole hour until they realised what was going on, everyone who landed on the article (on one of the most-read news sites in the world) was treated to this:

There have been numerous incidents in the past where a newspaper has embedded a tweet, only for the original Twitter user to change their username to something incredibly offensive – instant results!

The article has now been changed, and it’s easy to see how the mistake was made.

For some reason, they are still happy to feature me on there, even after insulting their readership. Weird.

The irony is that they have still got it completely wrong. I have not created any banners – I was merely sharing a link. But anyway.

For any nerdy types out there, I have archived the original version of the article on Wayback Machine so you can see the part where my page was embedded. It’s not particularly exciting, but enough people took enough screenshots for this incident to live on.

Don’t forget to give Whinge Whinge Whine a ‘like’ on Facebook as well. Her blog can be found here.

Fran’s fine with it all, honestly, as the picture above will demonstrate …