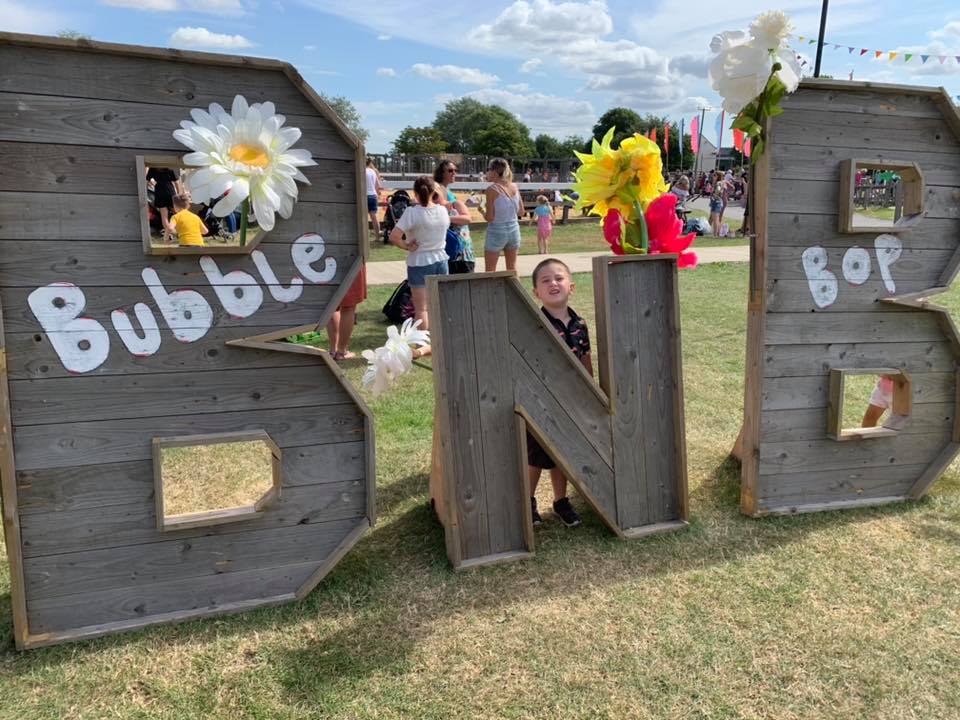 After my ‘very complimentary review’ of a local kids festival at the weekend, I was ready to forget about ever being invited anywhere ever again. So, imagine my shock when the guys at Marsh Farm in South Woodham Ferrers in Essex gifted me and the family entry and let me have a crack at them as well. The ‘animal adventure park’ is less than an hour from the M25 (A127 junction), and all summer long they have their ‘Bubble ‘n’ Bop’ festival with one major promise. £9.99 per person over two years old if you book in advance, and this fee apparently includes ALL activities. Not SOME activities. Not MOST activities other than rides that will set you back the average GDP of a small African nation. ALL activities. A bold claim for less than a tenner a head, but the Summer Holidays is the perfect time for a day out that is easy to budget for.

We arrived just after opening, and the first thing I noticed was that the parking attendants were proper crazy – no lacklustre hi-vis warriors in sight. The kids were already getting giddy watching one guy directing people into the overflow parking by throwing shapes that wouldn’t look out of place in Ayia Napa. This friendly, exciteable attitude was shown by literally every member of staff that we met during the day. We were given a programme of events (below), and this gives you a sense of everything that is included in your entry price. I’m not going to list them all here, but as you can see it’s mind-boggling. They know what they are doing – they want you to come back again just to fit it all in! We spent the first half of the day looking at the animals and petting a few of them, and this was when I noticed something rather odd. A lot of people in the area accuse Marsh Farm of not having enough animals, and yet we saw alpacas (including Sleepy Dave the Knackered Alpaca, pictured), cows, sheep, goats, kune kune pigs, chicks, a variety of birds, llamas, ferrets, guinea pigs and more – just what I would expect on a farm. I’m not sure what else they could host on a site that is basically a modernised working farm. Some elephants perhaps? Stampeding wildebeest? Lions? Tigers? The entire opening ensemble from The Lion King culminating in a wise old baboon holding up the future king of the savannah? You’d bet that someone over the river in Hullbridge would complain about the noise.

Anyway, back to their bold claim about everything you want for £9.99 (£11.99 if you pay on the door instead of online in advance). Turns out it isn’t bollocks at all. Animals aside, we went on the teacup ride, watched ferret racing, met a dinosaur and stroked him (finally), had an 18-hole round of crazy golf, went in a maze, dug for jewels in the sand, went on bouncy castles and spent ages in two different playgrounds.

If we had been able to stay for another seven hours, we could have also had a tractor ride, visited a full-size indoor soft play, watched a Glastokids show, gone to a Bubble and Glow Party, got our faces painted and glittered up, gone on a giant bounce pillow, danced in foam and even relaxed on a purpose built beach with a large paddling area. Did a single penny piece extra leave my vice-like grip today? No. Well, other than lunch which was what you would expect to pay inside any attraction. The five-piece kids lunchbox is pretty generous anyway. If you look at other reviews online, most parents say that their kids are absolutely shattered by home time, and it’s easy to see why. Luke was wide awake because he knows that the McDonalds down the road is technically inside an ASDA, which apparently is the most exciting thing in the history of human existence, but the other two were out for the count. As I said earlier, kudos for the fully-featured disabled changing facilities as well with a harness and large padded bench area.