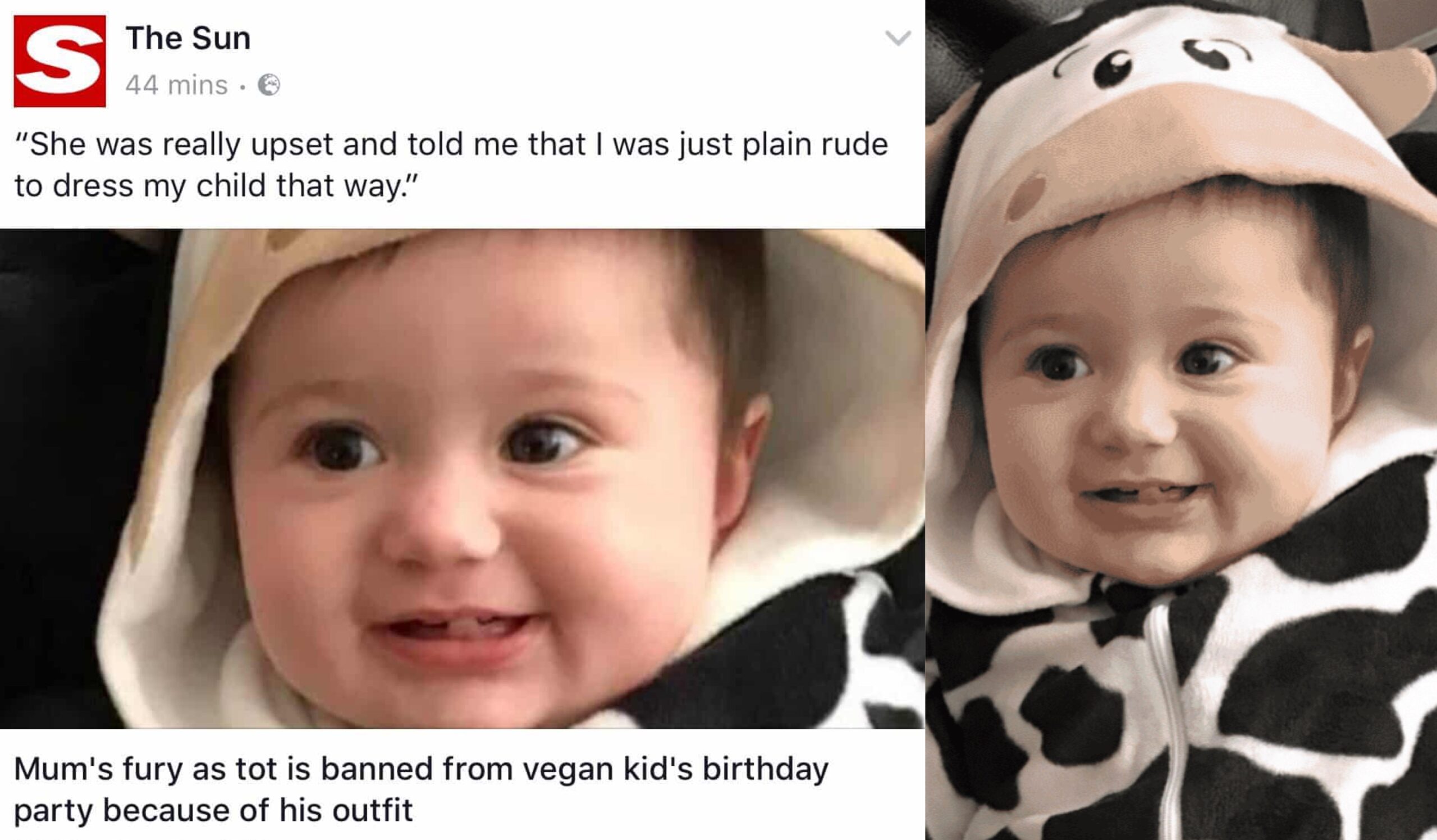 This happened in 2017 when my daughter Emma was about 18 months old, and I used my ‘fake’ news page to pretend that she had been kicked out of a vegan child’s birthday party for turning up in a cow onesie. You can read the whole sorry tale below, but to cut a long story short The Sun ran the story on their page for a whole three hours before they realised that it was all a load of bollocks. Apparently the fact that I called the baby ‘Tanya Hyde’ wasn’t enough of a red herring for them …

At Southend News Network, we are delighted to say that we have just managed to get everyone’s favourite news outlet The S*n to publish one of our made-up news stories as REAL NEWS.

This has to be our best-ever win.

24 hours ago, we published a ‘news story’ about a baby getting kicked out of a vegan party for wearing a cow onesie – including the fact that the baby was called ‘Tanya Hyde’ and the vegan mum was called Esmeralda Soy-Abbinton.

A vegan whose name was ‘soya bean’ – ground breaking stuff.

Anyway, we had the usual reaction of people who ‘got it’ and people who didn’t, but on Saturday morning we received an email from a photo guy at The S*n wanting to sort out an image.

Thankfully, our weekend girl Stephanie (made-up, naturally) was very helpful – she set up a fake email account and everything just in case.

At this stage we sat and waited with bated breath – surely someone, somewhere was going to twig?

After all, three seconds of Googling ‘Southend News Network’ would have given them all the information required to realise that the whole thing was a big pile of bollocks.

Now, seeing that the b*stards took it down (it only took them two hours to realise it was a wind up), you’ll all have to make do with these expertly captured screenshots (experts can contact us for the saved HTML and Internet Wayback has a cached text-only version here if anyone wants evidence).

There is also a cached version of the Facebook update here from their Facebook page. It’s a shame that the comments don’t work in this archive – some of them we’re utter belters.

If you don’t see the whole article, open this article in your normal browser instead of Facebook Instant or whatever.

To make matters worse, they currently have another article about fake news with the following paragraph: