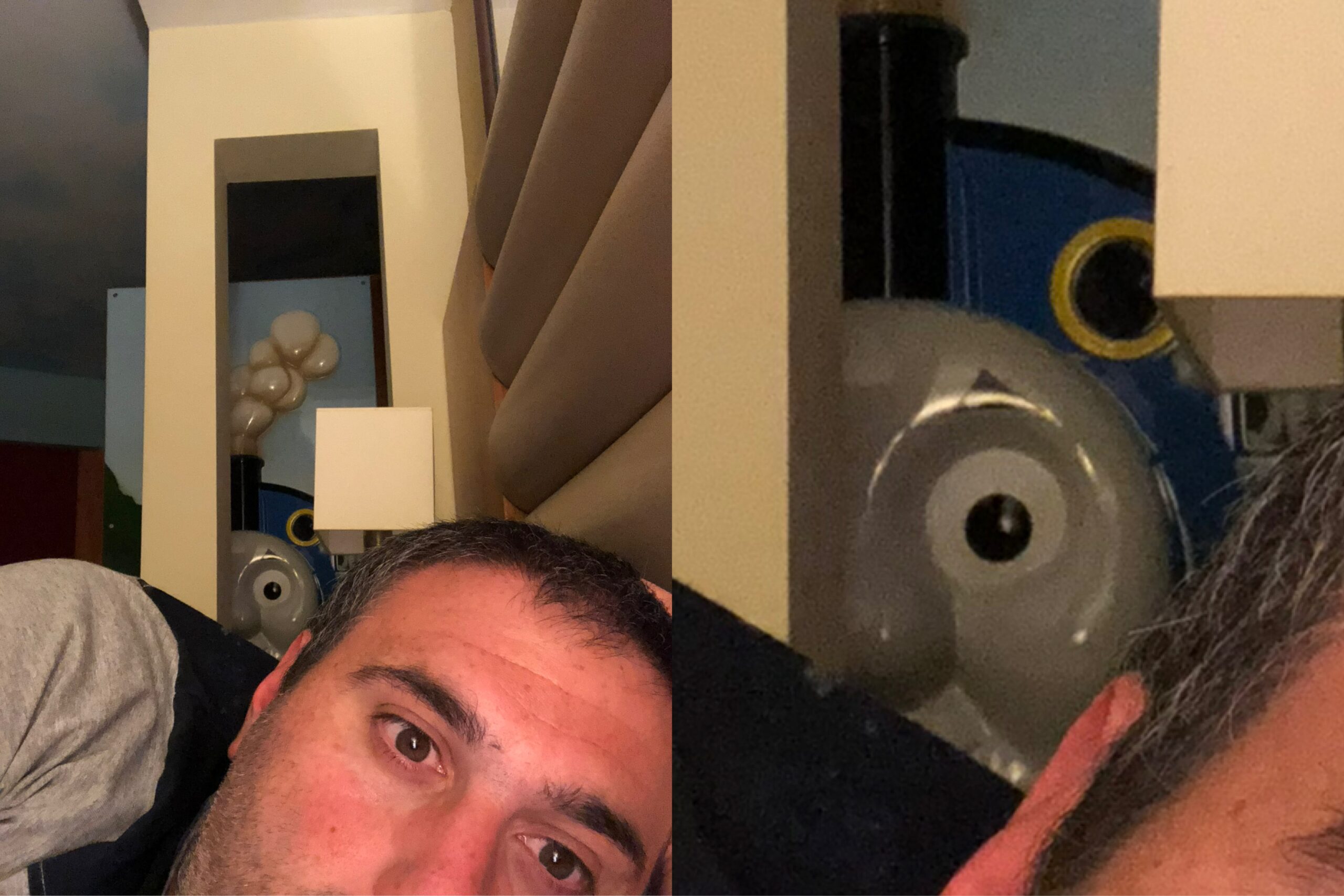 We recently stayed in a Thomas and Friends-themed bedroom at the Drayton Manor Hotel (situated next to the main theme park including Thomasland), and apart from the giant contraceptive bedroom ‘Thomas’ overlooking the main double bed, we had a pretty good stay.

To be fair, there will be couples out there who can ignore the very useful engine passing smirking and silent judgement on whatever they are getting up to – it’s 2021 after all and I am in no position to judge. Just look at him though, hiding behind that pillar, genuinely believing that he is inconspicuous, like a hippo using a sunflower as ‘cover.’ No wonder they give the important jobs to James.

When you choose one of these themed rooms for an extra charge, you get train track carpets, wall murals depicting the island of Sodor, bunk beds with individual DVD screens, and welcome gift bags. We have stayed in the regular rooms before as well and found them to be very comfortable and clean.

If your kids are anything like mine, they will also love the mini Thomas and Friends carousel in the main reception area. I have no idea how the staff put up with the same tune on repeat for an entire shift, but obviously they have somehow managed to learn how to tune it out.

Both before and during the pandemic, the buffet breakfast has been very well organised with plenty of choice, and everyone working there is great. It probably takes a certain type of person to thrive in a hotel where a significant number of tiny guests are in the throes of Thomasmania, but we have never had a single negative experience after several visits.

Price wise, it makes sense to take a package that includes entry to the theme park including Thomasland, unless you are staying there purely because of the giant ASDA down the road in Tamworth, and I would describe it as good value for money when you consider other theme park hotels.

Having been to the CBeebies Land Hotel before and left feeling like Mr Tumble had ripped my pants down and had a damn good go at my spotty bag (you don’t even want to know what Mickey did to me at Disneyland Paris), the regular room packages at Drayton Manor have felt like paying for a Premier Inn with theme park tickets on top. Not wildly expensive at all and the Thomas-themed rooms have been an extra £50-£80 on top per night.

If they have that much fun in the park during the day, the chances are that they will be too knackered to appreciate the themed room in the evening anyway. The first time we went, Luke managed to fall asleep the minute we left the park and walked back to the hotel, rendering the enhanced decor pretty much redundant, c*ckblocking giant Thomas and all.

The theme park itself is great, and I even discovered once that The Fat Controller still likes to be called The Fat Controller. I had a suspicion that the ‘real life’ one may have had some sort of PC alternative attached to him, but I was pleasantly surprised when he didn’t insist upon ‘Sir Topham Hatt’ or ‘The Portly Line Manager’ or whatever.

If you can drag the kids away from Thomasland for five minutes, the other rides, the zoo and the dinosaur trail are all entertaining as well, and in line with the hotel everything is generally ‘service station expensive’ as opposed to ‘theme park expensive,’ which is a welcome change to be honest.